Triceratops has a close relative. It has a special identity. The dinosaur Pentaurus lived in the late Cretaceous. It is a horned dinosaur. Its fossils are produced in Colorado and New Mexico. The adult pentagon has a body length of about 8 It is a horn-like herbivorous dinosaur. The pentagon weighs about 550.0 kg. I have produced pentagons that are large and small.

There are also pentagon models in the exhibition of animatronic dinosaurs. The shape of the pentagon is similar to that of the open horned dragon, but the size of the pentagon is larger. The first fossil specimen of the pentagon was collected in New Mexico, San Juan Basin. The pentagon has some teeth Like duck-billed dragons, old ones are worn away and new teeth are grown instead. But the difference is that the teeth of the pentagon are not as crushing and grinding as the duck-billed dragons. Its teeth are used for cutting. The pentagon model currently has 5 meters, 10 meters, and 8 meters. Teeth can be used to cut some palm and cycad leaves. The five-pointed dragon has almost the same front and rear skills, and their forelegs are very strong to support the heavy head. The short, slender tail apparently does not balance when walking. The Pentagon model is active, its pelvis and back vertebra heal tightly, and its hind legs have wide, hoofed feet, which makes it fast and stable to walk. Even fierce carnivorous dinosaurs like Tyrannosaurus can’t catch up when they attack it or are stabbed with blood by its sharp horns. 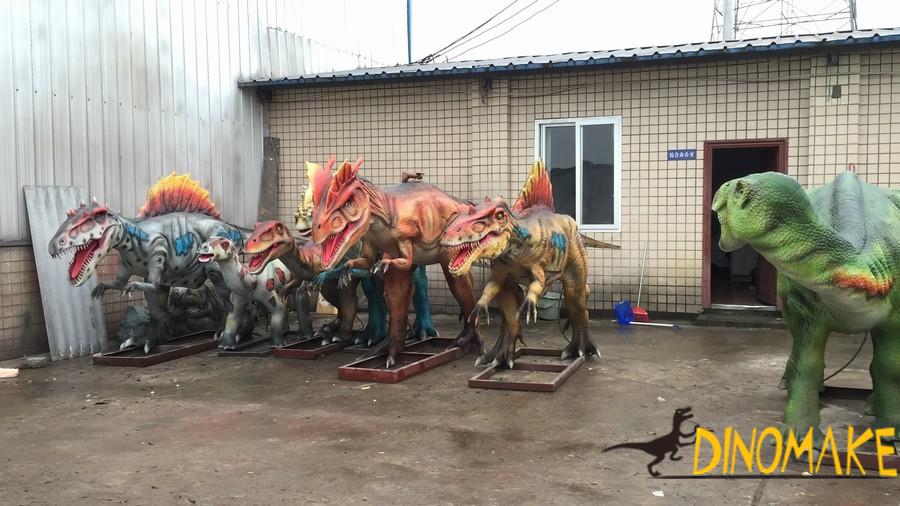 The animatronic pentagons are the last descendants of the horned dragon family. The pentagons are very popular in the exhibition. Although they have many survival advantages, they are helpless in the Late Cretaceous for various reasons. The appearance of the five-horned dragon seems to be a retrospective reflection of the entire dinosaur family before its demise. Half of it is the prominent dinosaur family’s dying struggle, and half is a tragic song about the unfortunate encounter of dinosaurs. Experts studying dinosaurs were relieved to find so many well-preserved dinosaur fossils. The pentagon can play a very important role in the animatronic of dinosaur exhibition.