In the animatronic dinosaur exhibition prop model, there is a dinosaur model that is beyond your imagination. The animatronic Argentinosaurus belongs to the sauropod dinosaur giant dragon class. The name is very simple, which means the dinosaur in Argentina. No complete bone fossil of this dinosaur has been found to this day, but paleontologists have discovered the super-giant spine of this dinosaur. Sauropod dinosaurs are arguably one of the most successful biological species in Earth’s history, and they successfully ruled the entire Late Jurassic. Since the Late Jurassic had a long period of climatic stability, a warm climate and sufficient food, these dinosaurs could grow extremely large. By the Cretaceous, most dinosaurs disappeared due to climate change. However, there are some sauropods in Argentina that not only did not become extinct, but also evolved to be larger than their Jurassic ancestors-this is the Argentinosaurus. 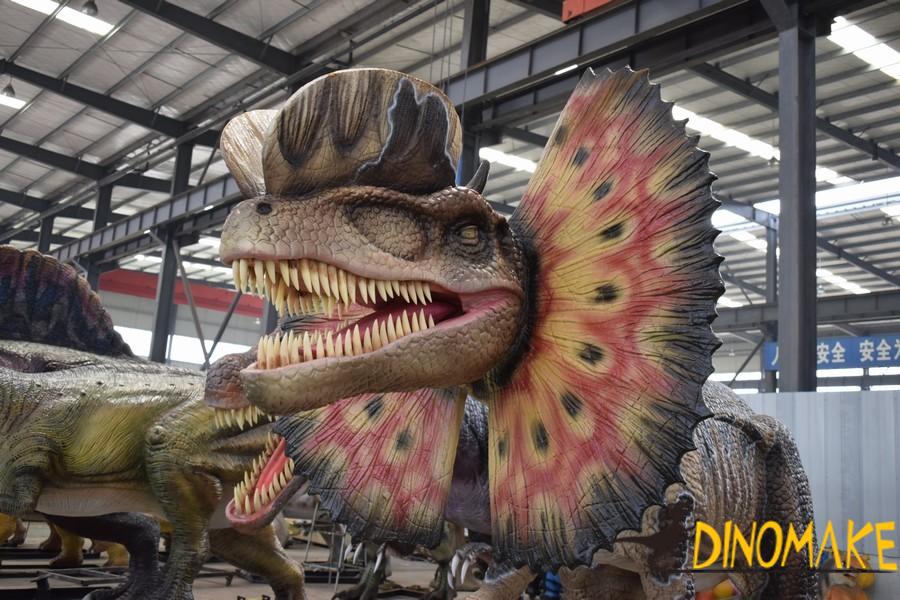 The animatronic Argentinosaurus belongs to the strong man of the sauropod dinosaurs. It lives in the Late Cretaceous. It may exceed 40 meters in length and weigh about 70 tons. Some paleontologists even speculate that its weight is close to 100 tons, equivalent to 2 brachiosaurus. Weight, you can see how amazing the volume of the Argentinosaurus. Although the size of the Argentinosaurus cannot be completely determined through the existing dinosaur fossil data, it is undoubtedly one of the sauropod dinosaurs. The dinosaur fossil of the Argentinosaurus was in Uincul Plaza, Patagonia, Argentina in 1987. The shepherd found in the pasture. At first he thought it was silicified wood. The official excavation began in 1989. The Argentinosaurus is undoubtedly the ultimate product of sauropod evolution. When the Jurassic and Cretaceous periods were replaced, the crust was active. It is very severe. Most of the sauropods that were once famous in the Jurassic Period were eventually unable to adapt to climate change and became extinct.

The climate in the early Cretaceous was colder than the Jurassic, and South America separated from Africa moved closer and closer to the equator, so the temperature gradually increased. During the Cretaceous period, South America was the only place suitable for sauropod dinosaurs. The local sauropod dinosaurs not only did not degenerate, but also became larger. Most of the sauropod dinosaurs that lived in the Jurassic period It ’s all gone. Although all the present dinosaur fossils are incomplete and no breakthrough has been found so far, the existing information has already enabled us to have a certain understanding of this dinosaur.