The animatronic dinosaur has a huge diplodocus

Seeing the earth, endlessly, you come and go. Once upon a time in the distant Jurassic period, there was a strange dinosaur on the earth that ruled the Americas for more than 10 million years. It is today known as Lianglong. Diplodocus lived in the late Jurassic period. It is a phytophagous dinosaur that feeds on leaves and ferns, and is also a representative of sauropods. Its fossils were discovered as early as 1878. Lianglong is huge with a total length of 28 meters. It has been considered as the longest dinosaur for many years. Its size is enough to scare the allosaurus and horns found in the same stratum. Predators such as the nose dragon are the most successful dinosaurs in the late Jurassic period.

The head of the emulated Liang Long is slender and small, and its nostrils grow on the head. The front part of the mouth has flat teeth, and the long side of the mouth has no teeth. Therefore, it may rarely chew when eating. Instead, it chooses the tenderer plants to swallow directly, like modern anti-bite animals. Diplodocus’s neck is 8 meters long and consists of about 15 spine bones. However, due to the small number of neck bones and their toughness, Diplodocus’s neck cannot bend freely like snake-necked dragons. Stretch your neck and sweep out an arc to eat food on the ground. Because Liang Long does not have the back teeth to chew food, the muscular stomach plays an important role. The gastrolith in Liang Long’s stomach can grind the leaves, and the leaves pass through the intestines to the intestines, and the bacteria in the cecum complete the process of digesting food. 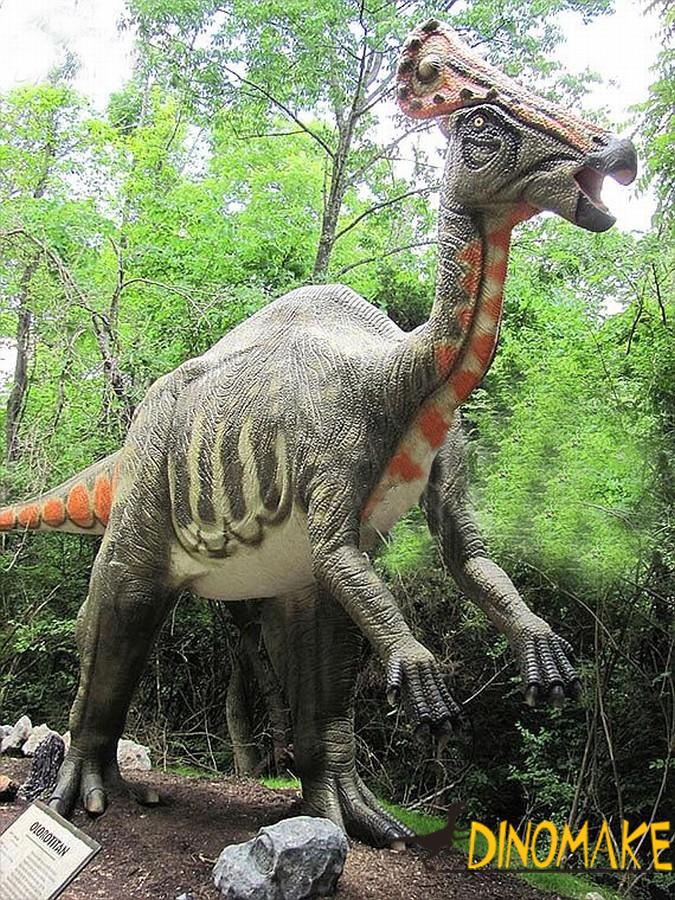 The animatronic dinosaur has a huge diplodocus

Although Liang Long’s body is very long, due to the lighter back bones, it weighs only ten tons and weighs far less than Brachiosaurus. Its body is supported by a series of interconnected central axis bones, called the spine. Its front legs are shorter than its hind legs, its hips are higher than its front shoulders, and each foot has five toes, one of which has claws. They can stand on their hind legs and support part of their body weight with their tails so they can defend themselves with their huge forelimbs. There is a large, curved claw on the bone-side toe of Diplodocus prosthesis produced by the animatronic dinosaur net, which is its sharp self-defense weapon. Like human heels, Liang Long’s feet probably have foot pads that can pad his toes. With it, Liang Long does not feel too strenuous when supporting his heavy body while walking. Diplodocus has about 70 tail vertebrae in its slender tail. It is about 16 meters long. Each section of the tail spine has two herringbone bones that extend outward. We call this structure a double beam. The long tail like a whip can help to defend against enemies and drive away wherever you go Other small animals. It can be imagined that Liang Long’s tail is constantly beating while eating.

The reason why Diplodocus became a very successful dinosaur breeding in the late Jurassic period has a great relationship with their behavior patterns. Diplodocus gives birth to many and many eggs each time. Born Diplodocus is only 30 centimeters long, and Diplodocus has the habit of migrating and does not take care of his children in time. Liang Long has a life span of more than 100 years, and it takes more than 10 years to fully grow. But dinosaurs grow much faster than mammals. They can grow to 4 to 5 meters a year, 9 meters in three years, 15 meters in five years, 28 meters in adulthood, and weigh 15 tons. . The young dragon develops very fast, and it can develop completely in 10 years. For young dragons not protected by relatives, even if the survival rate is not high, Lianglong can grow quickly so that their body shape can quickly reach a level comparable to that of predators, and they have the ability to protect themselves. It’s hard to hurt other dinosaurs.

Liang Long’s nostrils are located on the top of his head, and some experts have assumed that they live in water. Other large sauropod dinosaurs, such as Brachiosaurus and Confused Dragon, are considered to live in water. But this hypothesis was later revealed, because if the water pressure on Liang Long’s chest was too large, he would feel unable to breathe. After 1970, sauropod dinosaurs were generally considered to be terrestrial, but more recent research indicates that they live on the coast. People can never know the secrets of dinosaurs. If they can go back to ancient times and see this great creature with their own eyes, everyone’s doubts can be solved one by one. At present, we have 6 Liang Long, the largest one. 20 meters long, the smallest one also reaches 10 meters long.