Lanterns and dinosaurs are two major cultural industries with unique Zigong characteristics. The dinosaur industry is divided into two categories: museum fossil restoration exhibitions and corporate animatronic production exhibitions. There are 144 Animatronic dinosaur production enterprises in our city, with an output value of more than 600 million yuan in 2016, accounting for 95% of the country and 85% of the world. The products are exported to more than 100 countries and the foreign trade volume is nearly 8 million US dollars. $ 850,000.
When and where is the origin of the city’s animatronic dinosaur industry and what kind of development history has it experienced? “Zigong is the world’s largest production base of simulated dinosaurs.” How did the data supporting this claim come about? What efforts are being made by the entire industry to achieve greater development? With these questions in mind, the reporter visited the industry authorities and five companies. 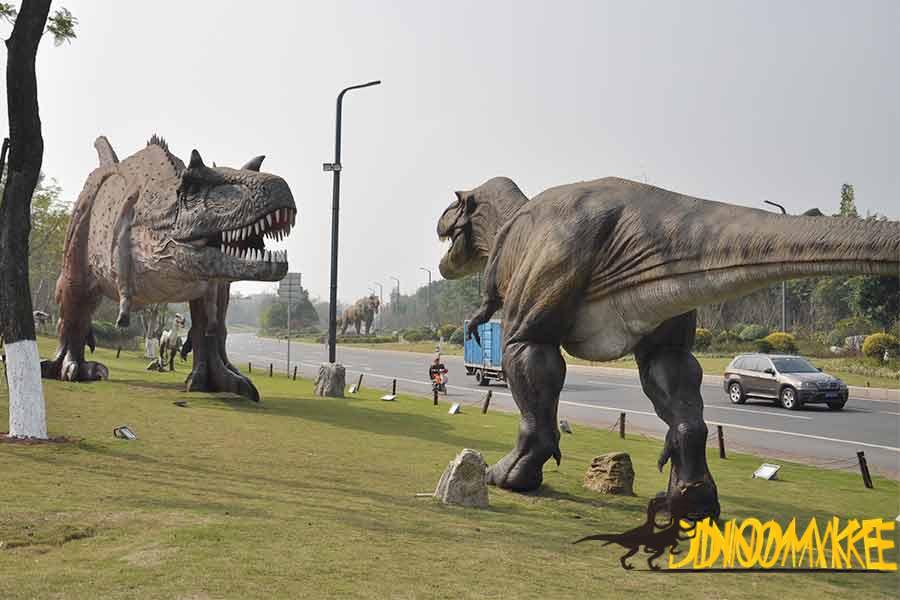 Started 29 years ago with ceramic dinosaurs
“Melting the essence of ancient times and collecting prehistoric giants.” This is the first impression that reporters of Sichuan Rio Tinto Landscape Technology Co., Ltd. have simulated dinosaur production bases.
On March 28, the reporter came to the company. Hundreds of employees are busy designing and manufacturing animatronic dinosaurs for 9 countries including India, Germany, and Japan. The latest delivery will be in mid-April next year, and the earliest will be for Pakistan. , Must be delivered before April 10.
During the interview, the reporter learned that among the earliest people in our city who produced animatronic dinosaurs, He Lin, general manager of City Development Art Design Co., Ltd., immediately rushed from Banking Industrial Park in Hi-tech Zone to Shuping Town, Ziliujing District.

According to He Lin, in 1988, Shawan Hotel established a tourism company and developed tourism products. General manager Nie Zetu urged Li Shaotuan, the director of the Painting Academy under the City Federation of Arts, to make a tourist souvenir, a ceramic dinosaur. Four years ago, Li Shaotuan became famous for his sculpture “Salt Springs” (commonly known as “Shepherdess”). After accepting the task, he led his apprentice He Lin and others to make ceramic dinosaurs 20-30 cm long.
“It was fired at the Heping Town Machine and Brick Factory in Da’an District.” He Lin recalled that the ceramic dinosaurs they made were realistic in shape and fine in workmanship, and were presented as gifts by the municipal government to guests, especially foreign guests.

In the winter of 1992, a Taiwanese wanted to build a dinosaur park in his hometown. After a special visit to our city, he invested in a factory behind the Taifeng Building on the east section of Jinhui East Road and began to make mechanical animatronic dinosaurs. Designed and produced by Zigong people Sun Chuanneng and Fujimoto Tokyu.
“This is the first company in our city to make animatronic dinosaurs. I worked there for two years.” Deng Peilin, chairman of the city’s Longteng Culture and Art Co., Ltd. recalled that the company was called Zigong Yuesheng Model Co., Ltd.
In the spring of 1995, Deng Peilin followed his relatives who worked as artists to come to this company to learn to do art. He said that there are two kinds of animatronic dinosaurs produced by Yuesheng Company. One is sculptural, with a steel frame structure and cemented body; the other is a steel frame structure with camel cashmere. Even if it is made of camel cashmere, its appearance is also tough, and it cannot be moved or called. Although it is practically huge, it cannot give people a sense of immersion.
In the spring of 1996, a Japanese company exhibited a simulated dinosaur in Chengdu. Its exhibits had soft skin, realistic feel, and a lifelike appearance. Yuesheng company arranged a number of artists such as Deng Peilin to observe. When the group returned to study, they found that the Japanese replaced the camel wool with sponge and glass glue. Zigong animatronic dinosaur production has taken a very important step ever since.