Triceratops, Latin Triceratops, is a herbivorous dinosaur. This is one of the well-known ceratosaurus dinosaurs. It is a horned dragon with short pleats. We made a large animatronic dinosaur Triceratops , Belongs to the large horned dragon. The triceratops skull in our animatronic dinosaur is huge, about 8 meters long and about 3 meters high. In fact, the Triceratops that lived in the chalk century are generally 7.5 to 9 meters in length. The head of the Triceratops has three horns. The horn above the nose is called the nose horn, and the eyes have two horns. It’s an eyebrow. The nose is shorter and the eyebrow is longer. Adult Triceratops have an eyebrow length of 1 meter, which is an important tool for their survival. Triceratops also have strong front and rear limbs. They can run 30 kilometers in an hour. Triceratops are a large number of well-known dinosaurs of the Cretaceous period. They used their sharp horns to fight countless times with Tyrannosaurus Rex.

The first Triceratops fossil in the world was its skull. It can be seen from the fossils that its head is very strong, with a short horn above the nostril and a long horn over one meter above each eye. Behind the head is a bone-like cervical shield. A complete neck shield can provide good protection, but it makes Triceratops ‘head heavier, so the muscles and bones of Triceratops’ neck and shoulders are also developed. Triceratops are a very successful evolution of dinosaurs, they dominated the late chalk broker. 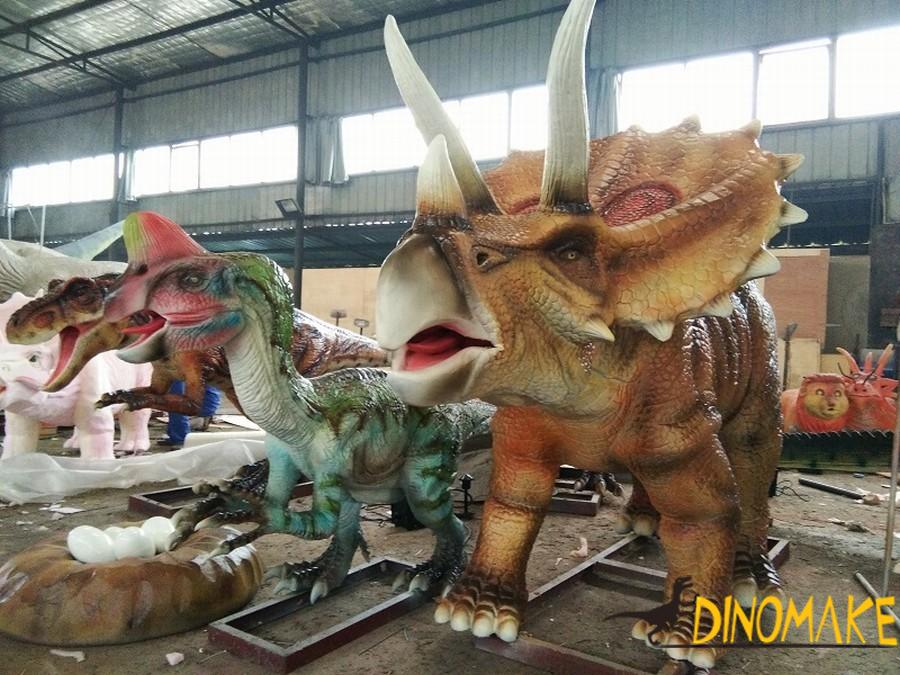 Our company not only does not simulate dinosaurs, but also simulates insects. All products of our company are produced in our own factories, and the animatronic series products used are very realistic. Each Jurassic themed exhibition will make visiting friends immersive.