We spend another day in the S.E.A Aquarium(South East Asia Aquarium), after visited the Universal Studio in Resorts World At Sentosa, Singapore. 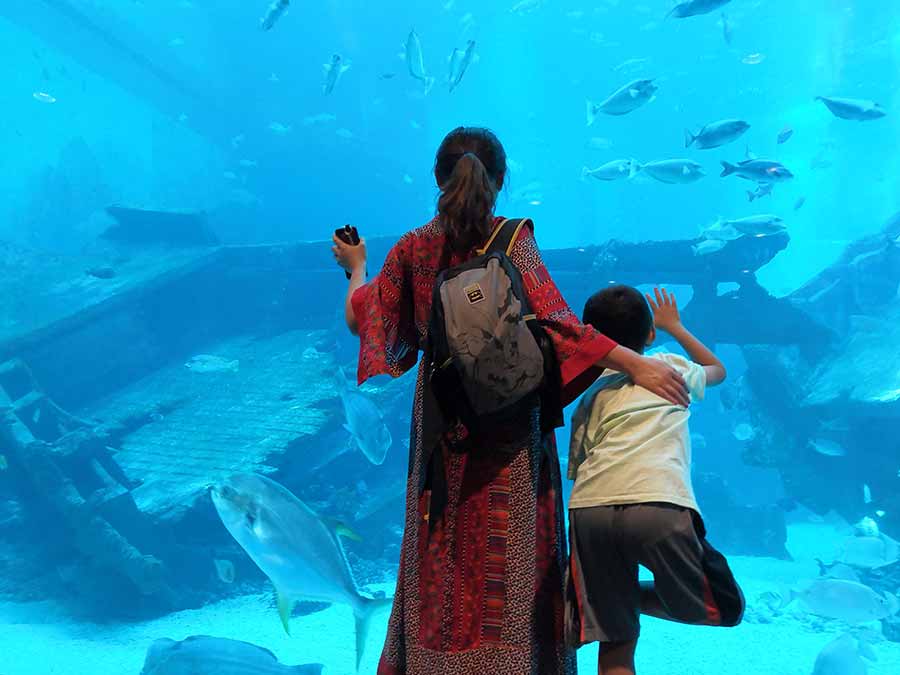 Cherry and her son Aaron

Marine ecosystem is the biggest ecosystem in the earth, with the largest creatures group. Therefore, the aquarium is full of amazing and mystic animals. 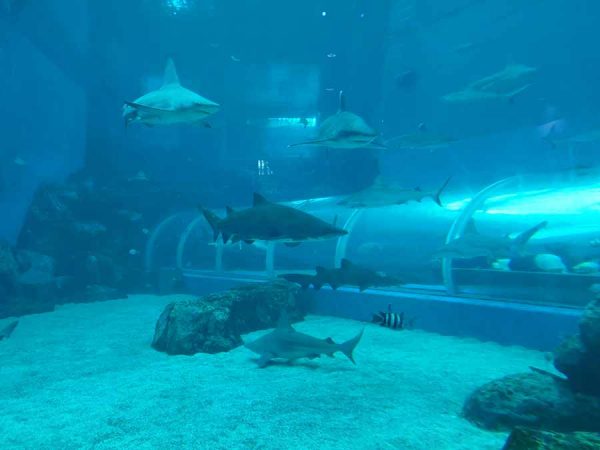 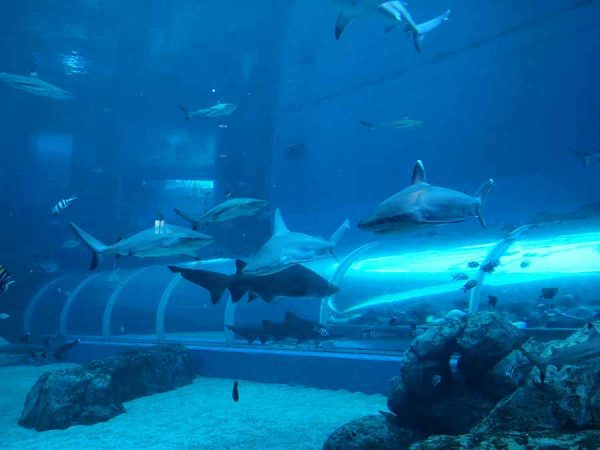 The huge water tank of sharks is alongside the entrance. So we will see the sharks at first. They are cool and impressive—with a impressive mouth full of sharp teeth.

You might have watched the famous film name Jaws which is directed by Steven Spielberg. This film described sharks as horrible animals and dangerous to human. 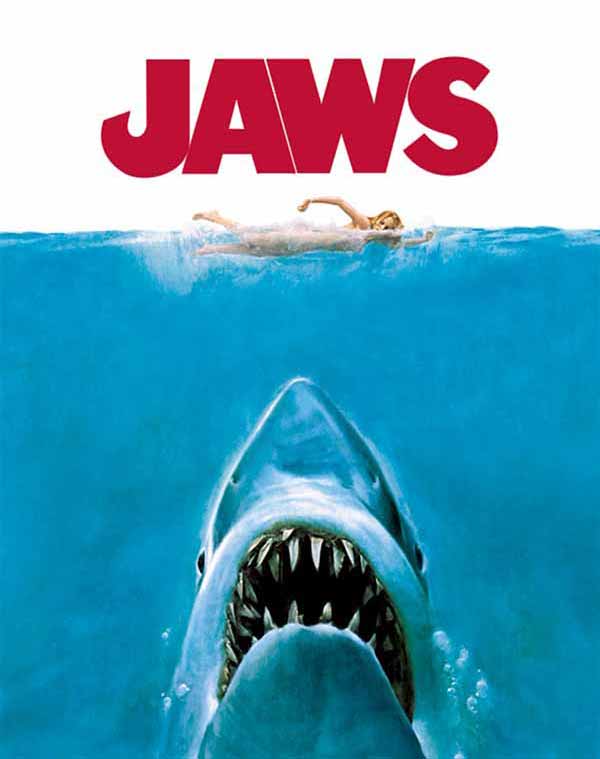 However, the facts are just the opposite. Human are the natural enemy of sharks. Some report shows there are over 100 million sharks killed by human per year, and the fact might be more than this data. Fishman will cut shark’s fin and throw them back to sea. Shark is a fish without swim bladder, after being cut the fins they will sink to the bottom of the sea and die here. 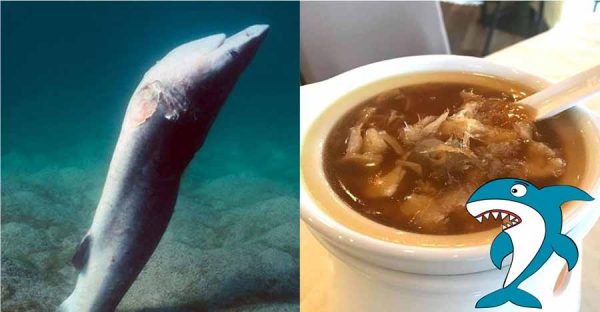 The cruel facts behind the delicious food

Most sharks got killed because people think the shark’s fin is delicious food. Especially, my people—Chinese. What a shame. I can’t understand why people are so cruel just because some rich guys want delicious food. The same cruel thing also happened in Japan, the difference is the victims turn to be dolphins and whales.

Another threaten for sharks is the marine pollution—people throw about 700-800 million tons litters, especially plastics which are difficult to decompose. Toxin substance in the sea water seriously threat the survival of marine animals like sharks.

To help people realizing the problem, the aquarium made a shark statue with the abandoned plastic slippers. 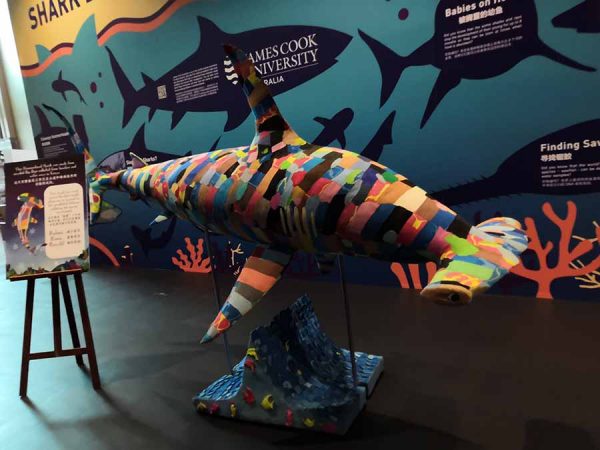 Shark statue made with the abandoned plastic slippers

Although I know some jellyfish are dangerous—for example the Portuguese man-of-war—they do looks beautiful. 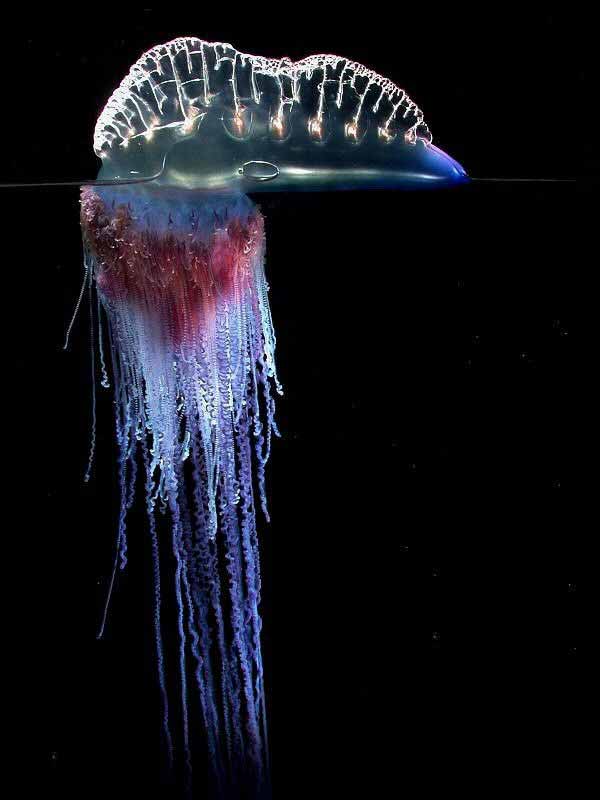 The jellyfishes display in the aquarium are mainly Pacific Sea Nettles and Blue Blubber Jelly. 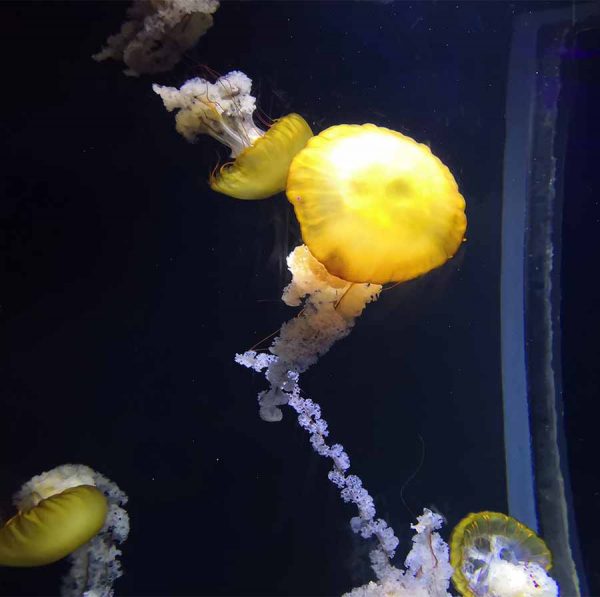 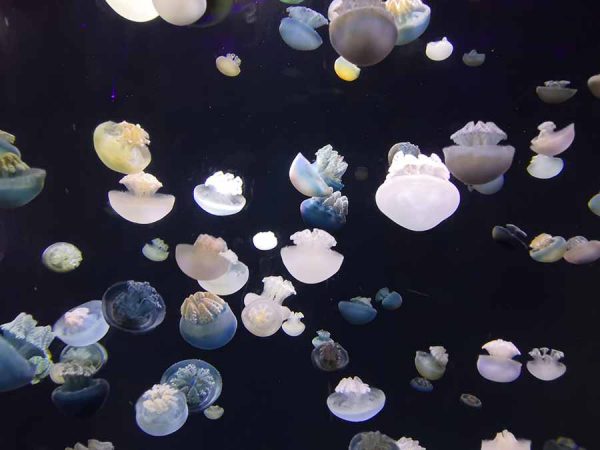 They are amazing, and they will change color fellow the lights of the environment.

Tropical fishes are highly ornamental, therefore they are always feed in peoples home. 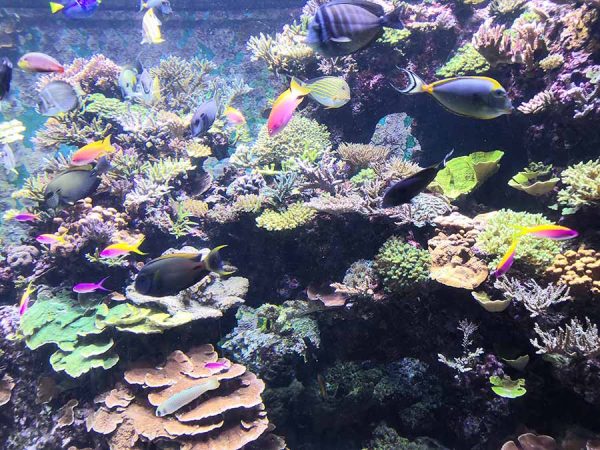 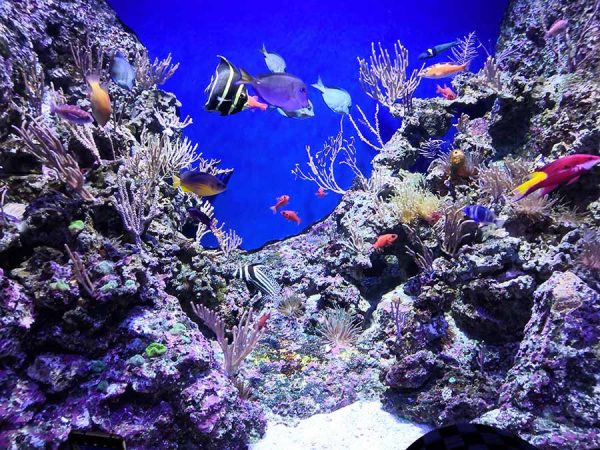 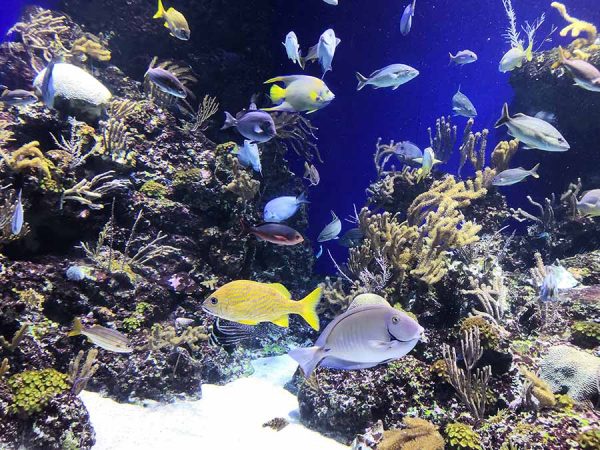 There are over hundreds kind of tropical fishes, most of them are unfamiliar for me. All I know is –I like them. 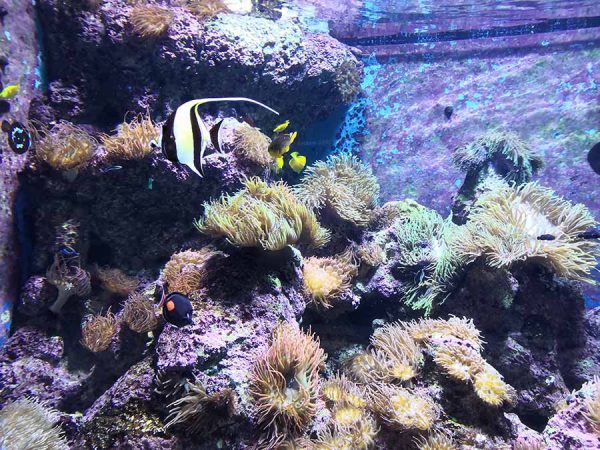 Beautiful corals are important for the marine ecosystem, they provide food and habitats for a lot of marine animals. 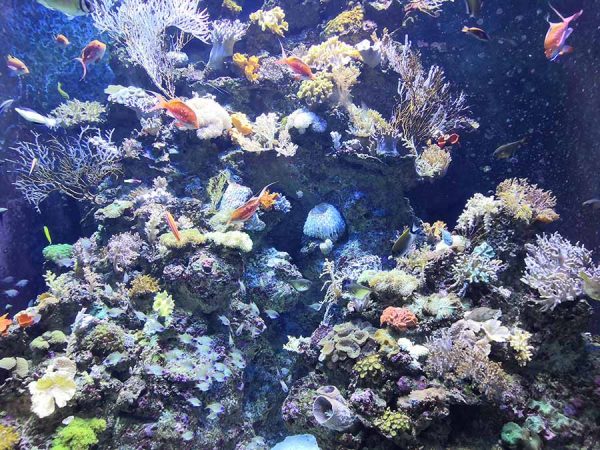 Died corals turn to be coral reefs, some of the Islands are formed of them. 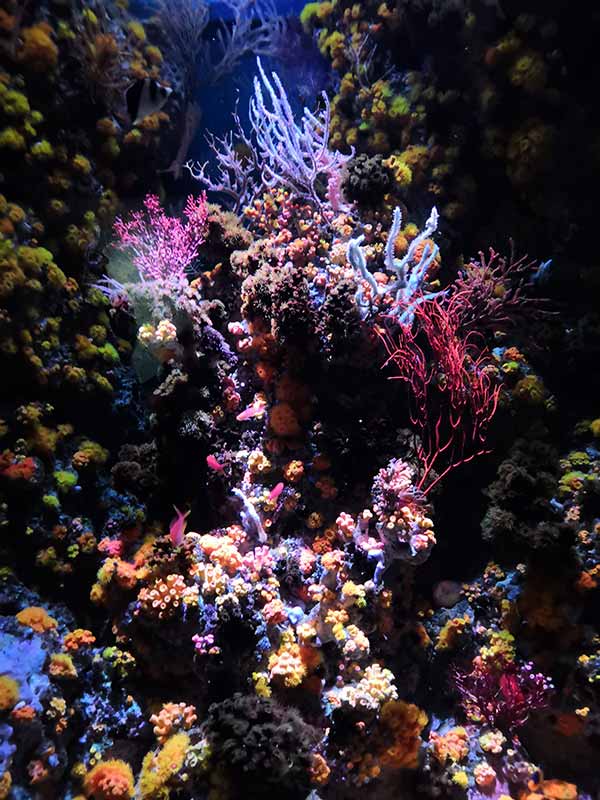 The corals and coral reefs in this aquarium are colorful, it shows us a mini ecosystem of the ocean. 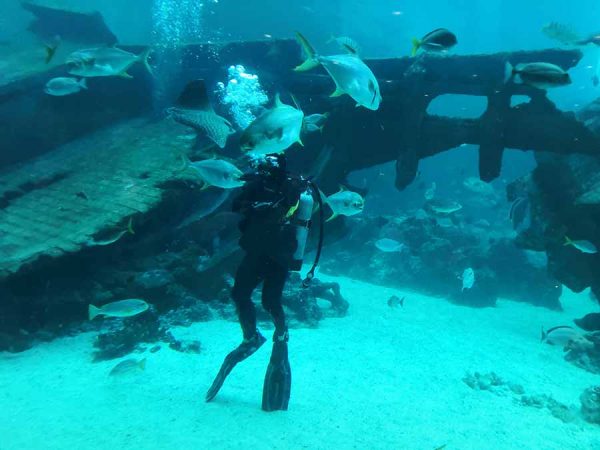 Divers are feeding the fishes

It attracts a lot of people to watch when they are feeding the fishes. Because fishes are more active when eating. This aquarium is special, a broken sunken ship is on the bottom of it. 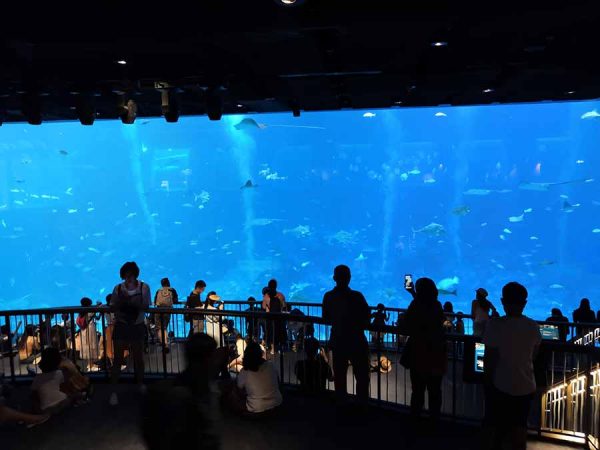 The S.E.A has one of the biggest aquariums, there are thousands of marine fishes here, you can sit in the hall and watch the fishes with your family. I had spend 2 hours here, the fishes are fantastic.

Here I made a video about the Journey in the S.E.A, I hope you will like it.

Enjoy your life my friend.

A Journey to Universal Studios Singapore–I

A Journey to Universal Studios Singapore–II

A Journey to Universal Studios Singapore--II The Lost [...]

A Journey to Universal Studios Singapore–III

A Journey to Universal Studios Singapore–IV

A Journey to Universal Studios Singapore--IV Carnival at [...]